Mar 26 4 Ways You Think You’re FTC Compliant, But Not

As influencer marketing continues to grow, the FTC is surely on the lookout for brands and influencers that aren’t revealing their relationships. Just last year the FTC settled its first lawsuit against two social media influencers for not disclosing their connections to a business and also sent out 90 “educational letters” to influencers as a reminder of their policies.

But still, influencers and brands are not properly abiding by these rules. A recent report released by Inkifi analyzed over 800 Instagram accounts to identify proper FTC disclosures and the results were surprising. While 71.5% of accounts clearly disclosed sponsored content, only 25% of those disclosed in a way that fully complied with FTC guidelines.

What Does this Mean for Brands?

For starters, if you’re not already making it a requirement for your influencers to comply with FTC guidelines, you need to do so. eMarketer released a study that showed four in 10 influencers said they only label their content when asked to do so. That’s absolutely unacceptable, and the FTC is going to take advantage of this and start cracking down on more brands.

Secondly, make sure you’re fully aware what is actually FTC compliant. Many brands are promoting content that they think is FTC compliant, but technically isn’t.

To help shed some light on what the FTC guidelines actually state, we’re breaking down four ways to properly disclose a “material connection” between and brand and an influencer. 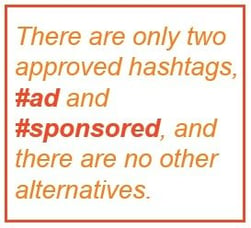 When FTC regulations were first introduced, many brands thought they were being compliant just by using any type of hashtag that might allude to the fact that there's a partnership. Hashtags like #partner or #spon were very common and we still see influencers today using these hashtags today. However, the FTC has specifically said that these are not compliant hashtags. There are only two approved hashtags, #ad and #sponsored, and there are no other alternatives.

Additionally, when it comes to long-form content, you need to state language such as, “this post is sponsored by X brand.” Hashtags are not required in this scenario because it's not relevant to the channel.

Many times, you’ll see people burying their disclosure hashtags within a string of random hashtags. This is incorrect because it doesn't meet what FTC has said about being clear and conspicuous. If you bury a hashtag, it's not readily visible, someone might miss it, and that doesn't comply.

It's very important that you have the influencer place the hashtag either at the very front of the post or as the first hashtag in a string of hashtags. At Carusele, we take it a step further and require our influencers to visually separate it from a series of hashtags to make sure that there is no way that it can be missed.

It’s also important to know that the FTC has also come out and said hashtag disclosures must be placed before the “read more” button. This means influencers have to place that hashtag before a certain number of characters, which is different on Instagram and Facebook and Twitter. This is because the hashtag must be visible while the user is scrolling through their feed and doesn’t have to take an additional action to see the disclosure. 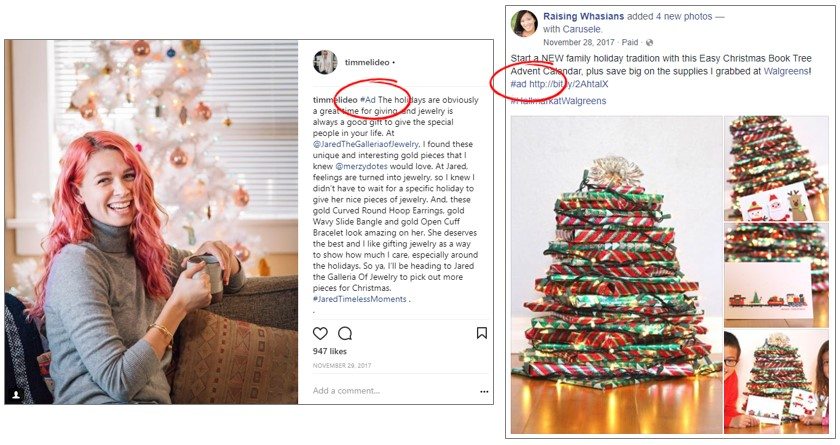 While Facebook and other social networks have created platform specific tools that show that an influencer and a brand are working together, the FTC has come out and said that using these tools is not enough to comply with their guidelines. These rules only apply to the platforms. You still need to use #ad or #sponsored in your posts on Instagram and Facebook.

While it used to be enough to put #ad or write “this is a sponsored piece of content” in the caption of a video, that is no longer enough. The FTC has said that brands need to make sure people understand the content is sponsored in the way they're naturally consuming it. So, you need to disclose upfront in the video, either verbally or ideally with a caption of some sort, that this is a sponsored piece of content. And if the video is a lengthy video, you need to repeat it a few times within the video, and at the end of the video, so it does not get missed.

Now, it’s not only your responsibility to inform you influencers about these rules, but you need to make sure that they’re also following them. If you don’t, the FTC could still go after you over the influencer.

At Carusele, we take two crucial steps to ensure all our content is FTC compliant. It starts with our Influencer Welcome Packet. While we customize these for every client and campaign, we always make sure that all FTC guidelines are included in the packet. Not only is the packet reviewed and approved by our clients, every influencer receives this welcome packet as part of their contract and required to comply with its contents.

Secondly, and we talked about this a previous episode of The Spin, our campaign specialists manually review every single piece of influencer content after it goes live. From blog posts to social shares, they are putting eyes on that content to make sure it’s FTC compliant. If it isn’t, we pick up the phone and connect with our partners to make sure they update that content.

Hopefully this helps you better understand what’s truly FTC compliant and how to work with your influencers to ensure they’re properly publishing. The last thing that you want right now is to be made an example of by the FTC.