We've been talking a lot lately about the growing brand concern over influencers buying fake followers and engagements and, most recently, addressed why brands don't need to be in a panic over fake followers. So why are brands still so concerned? Many don't have the tools or reporting capabilities in place to ensure their influencer campaigns actually reach the intended audience.

Good news is, you don't need to spend a ton of money on fancy tools that, at best, make an educated guess on who you reached. You just need to structure your influencer campaigns to ensure targeting and confirm the audience you reached is made possible by the tactics you employ.

Step 1: Choose Influencers According to Who They Reach

Too often, I see brands selecting influencers because the influencer themselves mirrors the target audience and sometimes that works because sometimes, the people who follow them are just like them. However, by stopping there you might be missing out on a more influential category of influencers. Instead, we follow what we call the ABCs of influencer selection and the very first step (A) is confirming that the influencer's audience matches that of our target audience. You do need an audience insights tool at your disposal to do this and lucky for you, some influencer marketing agencies, like Carusele, have those tools at their disposal already so you don't have to shell out hefty monthly fees to access them. 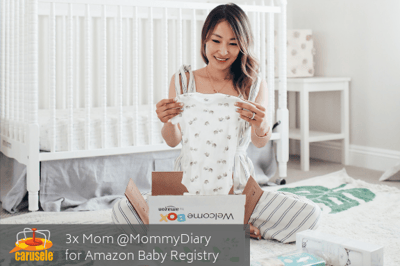 For example, we regularly run campaigns for baby brands targeting pregnant or new moms. And pretty consistently we find the influencers who drive the most conversions in these campaigns are not pregnant or new moms themselves. Instead, they are experienced moms, often with 2-3 children, with the youngest being at least toddler age or older.

And, while influencers who are pregnant, first time moms might fall within the actual campaigns target audience, there are two common sense reasons why their content doesn't convert as well. First, they built their follower base for a reason other than being pregnant. Maybe they started as a lifestyle or fashion influencer? While their own life and the life of their followers has no doubt evolved since the accounts origination, it's unlikely all her followers are at the point in life where they're considering baby products like she is. Second, as a first time mom herself, she can't come from the perspective of having tried it all and finding a product she loves. She's in the same boat as other new moms, discovering new products and making her best guess at what will work for her and baby.

At the same time, experienced moms have been around the block a time or two. They often have tried multiple products so when they recommend a certain one, their recommendations carry more weight. Plus, they've built a following and trust over the years as someone moms can turn to for advice. 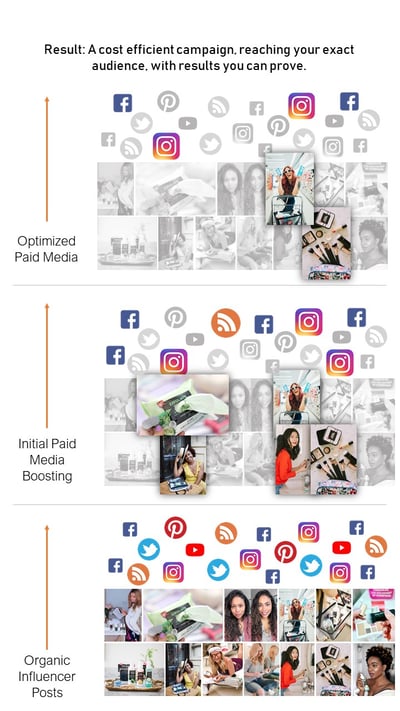 Carusele influencer marketing campaigns are executed very different from the traditional approach that hasn't changed in the last 10 years. We look at influencers as content creators (which others say too, but honestly, that's just talk) and their organic audiences like a focus group to tell us which creative and story angles are serving our client's objective best. From there, we layer in a variety of syndication mechanisms, most often based in digital media platforms, to amplify only the best performing content.

That amplification is custom-targeted and optimized to drive our client's specific objective. We call this approach a double-float test and using this methodology, regularly see ads from influencer accounts getting media efficiency that is 20-50% better than the CPMs or CPCs brands are paying from their owned channels.

Step 3: Verify The Audience Who Engaged with Your Content

At Carusele, we use a propriety audience tracking software that let's us match users who clicked on tracked links in our campaigns to users recognized by Google and build an audience profile of the most engaged users in our influencer campaigns. We debuted Engaged Audience Profiles™  last summer and it's quickly become a favorite report for our clients as it not only verifies that we actually reached and activated the campaign's intended audience but we often see insights come back showing us characteristics of the people within that audience that responded best to campaign messages. 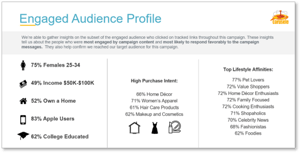