Challenged with an aging core buyer and a goal to increase market share, Laura’s Lean hoped to leverage influencers to increase awareness and consideration, ultimately increasing household penetration with both their core buyer audience segment and a younger, growth target audience.

Micro-influencers in the recipe, food, and lifestyle categories were engaged in a long-term, ambassador building effort to create meals featuring Laura’s Lean ground beef and plant-based burger products. Influencers were specifically chosen for their propensity to focus on “better-for-you” food options and to have an audience that aligned with one or both of the brand’s target audiences.

Before engaging, each influencer prospect was thoroughly vetted, first by a quick check against the three key data points in Carusele’s qStack™ audience quality rating. Passing influencers were further vetted against eight additional criteria designed to ensure the perfect fit for the brand, key messages and campaign objectives.

Hand-picked influencers were then tasked with creating compelling visuals and video content that was seasonally relevant and offered a solution to their audiences’ challenges, like quick and easy family dinners, creative twists on a hamburger, internationally-inspired recipes, and kid-approved dishes. In every post, influencers highlighted Laura’s Lean beef as a premium, healthier beef option, educating audiences about Laura’s “Never Ever” promise and encouraging them to trade up the next time they’re shopping for beef at a highlighted retailer.

Every piece of content published was evaluated using Carusele's cStack™ content scoring algorithm and top scoring content was turned into social ads running from the creator’s handle. This unique approach to content boosting ensured only the content most likely to generate positive results received the media investment. From there, each ad was optimized regularly by manipulating the creative format, calls-to-action, platforms, placements, and audience targeting, all in response to real-time KPI performance.
Insights around content performance, audience segmentation, and influencer efficiency were leveraged to continually adapt the program. Content performance insights were leveraged to tweak the creative brief provided to influencers and Carusele's iStack™ influencer ranking, which surfaces influencer performance efficiencies, guided which influencers were signed on to become long-term ambassadors for the brand.

Throughout the campaign, typical social KPIs related to awareness and engagement including True View Impressions, audience attention, ad recall, and engagement rates were monitored, however, these were only indicators of potential business impact. The real results came in through a custom brand lift study designed to evaluate the effectiveness of the content influencers were generating. 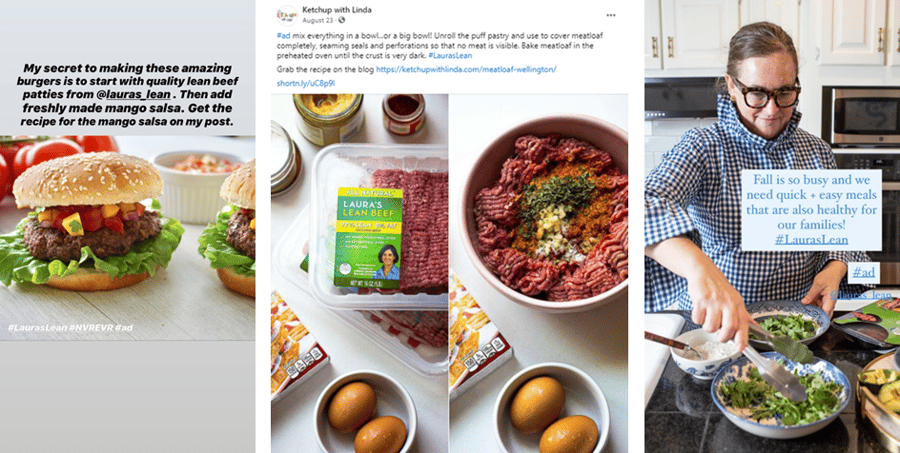 In partnership with Group RFZ, a survey was conducted, asking brand awareness, consideration, and purchase intent questions to exposed and control groups, segmented by demographics in line with Laura’s growth and core buyer targets.

The results of the brand lift study were overwhelmingly positive. Lift in both unaided and aided awareness was well above benchmark for both audiences at +7 and +18 points respectively. The lift in brand favorability was also strong with an impressive 18-point lift over the control groups. We also saw the Core buyer reporting willingness to pay more for Laura’s Lean with a 13-point lift above the control audience.

While we saw a modest 3-point lift when it came to intent to purchase within the next month across both audiences, the lift among the growth target respondents reporting they would definitely buy increased by an impressive 6 points. What’s more, the growth target also saw a positive swing among those reporting they definitely would not buy with a -6pt delta compared to the control group.

Overall, the study showed the campaign’s content to be effective at increasing awareness and moving both target audiences down the purchase funnel.

While the always-on ambassador-building campaign continues, KPIs in the first 12 months have exceeded goals across the board. To date, the campaign has delivered 76M viewable impressions, 285K engagements and earned more than 7M minutes of audience attention. With 97 activations in just the first year, influencers published more than 1,500 pieces of content about the brand and generated more than $350K worth of original content now available to the brand for use on their own channels.

For questions regarding this brand study, or if you're interested in partnering with our agency on a similar program, contact our team today. We'd love to hear from you!