The Industry Has Not Normalized Paying Influencers

To pay or not to pay? Is free product enough to get an influencer to write about your brand? The answer is almost always NO! At least not if you want to give them any parameters or requirements. Brands hoping to partner with influencers in exchange for product need to tread very carefully. Any relationship, be it in business or life, should be built on mutual respect. So, if you’re considering offering only free product to an influencer, keep that life lesson in mind and maybe learn from Pink Lily’s mistake…

You may have seen the Buzzfeed story last week about Pink Lily’s brandstanding during Black History month where they specifically sought out partnerships with black influencers but then refused to compensate them for their work if they had less than 50,000 followers. This comes less than a year after the brand was called-out for it’s white-washed marketing, which they acknowledged, followed by an Instagram post featuring the first black influencer to don their feed as far back as our listening tools could go. (An influencer with less than 50,000 followers by the way, which now leaves us wondering if this talented creator was paid to be the face of their brandstand. 🤔 I hope so!)

As you can imagine, this policy made some influencers with less than 50K followers quite angry. As one influencer put it:

“This is particularly problematic, as it reads as if we’re being used as a prop to appease your temporary guilt or address customer complaints without taking real action. The lack of fair payment (or any payment for that matter) says that you still see us as people to be used up, drained, and exploited.”
- Kimberly Renee 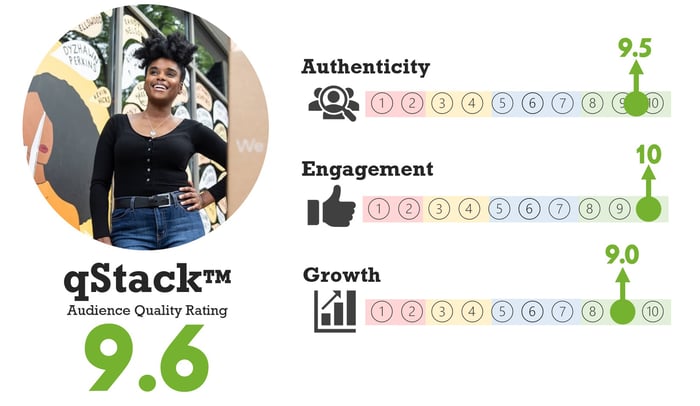 NOTE: While we typically don’t share our qStack™ scores for influencers outside of our client-base so as not to expose their data publicly (#respect), we felt Kimberly wouldn’t mind the world knowing the level of quality influencer Pink Lily was dissing.

Now, there’s a lot to unpack with this story, but to sum it up, it is sadly just yet another example of a brand who, whether intentionally or not, has not only shown but stands behind a policy that both incentivizes bad behavior among influencers and shows a complete disrespect for the talent of the creators they exploit.

Here’s the thing, if you don’t want to pay people for the work they do, don’t work with them, it’s that simple!

HOUSTON, DO WE HAVE A PROBLEM?

I’d like to assume positive intent and chalk it up to ignorance, however, I can’t even give Pink Lily the benefit of the doubt on this one. This is a brand that is applauded for being one of the largest e-commerce retailers on Instagram with over a million followers.

But a closer look will show they’ve amassed that following built on the backs of influencers they have a policy of not compensating appropriately. In just the last 24-hours, Pink Lily has posted 24 times on Instagram. That’s 24 unique images, every last one featuring influencers. At least 20% of those posts (possibly more since some of the influencers featured aren’t tagged or credited) were influencers who, by Pink Lily’s own policy, were not likely paid for the content the brand is now using.

Do you know what it costs brands like Pink Lily to do a single day-long photoshoot, only to walk away with a couple dozen usable photos? $10k… $20k… Sometimes $100K depending on the location.

Let’s take the lowest shoot-day budget, $10K, and assume they’d get 24 usable photos out of it (generous given nearly every photo used in this 24-hour period features different “models” and scenes.) That’s a conservative average cost of $416 per photo.

Now we can assume according to their own policy, they didn’t pay at least 5 of the influencers featured. That’s a one-day savings on content production costs of at least $2,000. Multiply that by how much they post in a year (roughly 1x per hour) and Pink Lily is saving nearly $1 million each year on creative costs.

While I suppose you could call that a fiscally sound business strategy, I’m finding it hard to argue with the influencers like Kimberly who feel like the brand doesn’t respect their craft and isn’t approaching them with a fair and equitable rate for the work they’re being asked to do.

So, what’s a brand to learn from this? Consider this: Could your brand get away with not paying a professional art director or photographer for their work, regardless of whether that work resulted in measurable, positive ROI? I can tell you the answer to that question is “No”.

Influencers are professional content creators. The difference between them and your in-house art director is they have a likeness, credibility, and online following that also benefits your brand beyond the fabulous image they’re able to create for use on your Instagram account. And while I could go on and on about how influencer rates need to stabilize, how bad behavior by influencers threatens to ruin the industry, and how some influencers are pricing themselves out of a job, the issue in this case of whether influencers are professionals who should be adequately compensated for their work regardless of whether they have 50K+ followers on Instagram or not is a pretty clear yes in my book.

If brands continue to disrespect the craft, it won’t be long before the unions that are already starting to form will price this industry out of existence.